The Intestines and Health
- The intestines represent the largest compartment of the immune system. -

The role of the intestines is not just to absorb nutrients and moisture. More than 60% of the immune cells in the entire body are concentrated to the digestive tract, which is constantly exposed to food and bacteria, and control the immunity of the whole body by removing harmful substances.

Complicated information processing is carried out between various lymphocytes in the Peyer's patch at the end of small intestine. This plays an important function in the immune system protecting the body, and is called “gut immunity.” The role of gut immunity has steadily and gradually been clarified.

When conditions in the intestines are poor, gut immunity does not function well. When the immune system fails, sickness and allergy symptoms appear. To maintain physical health, it is important that the digestive tract remains healthy.

Fecal Examination Of The Intestinal Environment

What kind of intestine is considered healthy?

In the human digestive tract, a large amount of gut bacteria symbiotically exists. While this amount varies by individual, gut bacteria constantly residing in the large intestinal mucosa is said to be more than 600 trillion to 1 quadrillion, in 500-1,000 types, weighing between 1.0-1.5 kg. This conglomeration of bacteria is called “intestinal flora.” As individual as one’s fingerprint and face, the type and combination of gut bacteria is infinite in variety. Depending on the combination, one’s intestinal environment can be good or bad. Unseen to the eyes, 1kg of bacteria exists in the intestines alone. It is easy to understand how this would greatly affect one’s body. 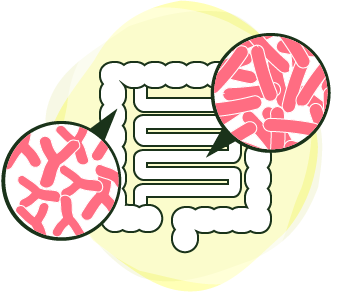 Representative of good bacteria are bifidobacteria and lactobacillus. These maintain intestinal function, and improve constipation and diarrhea. They multiply in the presence of lactose and glucose as nutrients, produce lactic acid and acetic acid by lactate fermentation, to maintain the acidic properties of the digestive tract. Moreover, beneficial substances for body, such as organic acid and vitamin, are also produced.

On the other hand, representative of bad bacteria is Clostridium welchii. Bad bacteria decompose food particles in the digestive tract, and produces decomposed particles such as hydrogen sulfide and ammonia, and substances which cause gas and bad odors. Moreover, carcinogenic agents and hazardous materials such as nitrosamine and secondary bile acid are formed, and sometimes cause disease. The effect of bad bacteria is endless. For example, when the balance in gut bacteria is lost and bad bacteria are more plentiful, immune-regulation decreases, and leads to symptoms such as allergies.

There are many kinds of opportunistic organisms, such as E-coli, bacteroides, and streptococcus. Described as “both good and bad,” these can have a bad effect when bad bacteria are predominant, and can have a good effect when good bacteria are predominant. Since many things are still unknown about opportunistic organisms, new roles may be discovered in the future.

A good balance of gut bacteria for a person who is not constipated or diarrheic with good daily bowel movement is said to be 20% good bacteria, 10% bad bacteria, and 70% opportunistic organisms. When bad bacteria are predominant, decomposition occurs in the digestive tract, resulting in constipation or diarrhea, and a malodorous stool. On the other hand, when good bacteria are predominant, fermentation occurs in digestive tract, and good stool with about 80% moisture is produced. Bowel movement is daily, and one’s stool is not malodorous.
Therefore, reducing bad bacteria and maintaining an intestinal environment predominately with good bacteria is important for our health.

Now you can shop our products online from outside of Japan. Currently we can deliver to limited countries, which are Australia, Malaysia, New Zealand, Singapore, South Korea, Thailand, The Philippines and Vietnam.

If you would like shop from the other countries or purchase our products not listing on our online store, please contact us and ask for your local dealer.